School advertisements work a little differently than ads for a product or consumer service. The ads have to appeal to both prospective students and their parents, and while they follow similar aesthetic and structural marketing principles, it’s important to show future potential in a way that isn’t typically the case with traditional advertising.

On top of this, they need to stand out from the competition, who are all trying to promote a similar theme. To do this takes a little creativity, and this means using the right distribution channels and a fresh approach to ad design. In this article, we’ll suggest ten tips for boosting your enrollment using creative ideas that don’t directly follow the standard approach. Let’s get started!

Each school advertisement you make will differ based on the distribution channel it’s intended for. Before we take a look at some design ideas, let’s break down some of the creative benefits of five common places a school advert can be hosted.

YouTube is the second-largest search engine after Google. Video ads provide a huge opportunity for creativity, and, when done right, can evoke interest and enthusiasm in precisely the people you want to reach.

Further, a YouTube ad can be linked in various forms, increasing its implementation and range.

Follow some basic ad rules when using YouTube: lead with a hook, tell a story, and always end with a call to action. Finally, make sure the visuals are as high-quality as possible (more on that later).

Radio is a somewhat outdated form of advertising and many organizations fall foul of this. However, it’s still a very wide-reaching and useful format when approached correctly.

School ads on radio need to be focused and targeted, and it’s important to poll your audience beforehand to make sure you know which channels to pick.

Treat radio ads as just another touchpoint of lead generation, and it can be a great contributor to your enrollment numbers. Use it to lead people to your other ads and media, and make use of the creative freedom, music, and testimonies that shine through in an audio format.

This is the most cost-effective way to target your ads, and should never be overlooked. Still, it’s not as simple as posting and waiting. Make sure to boost posts, track stats and use the entirety of your internet presence for lead generation.

Making the best of social media is much more than designing and posting an advert – it’s about being present, presenting a human front, and establishing your school as a leader in the field.

Make good use of your contacts to reach out to relatives of current and graduated students for advertising your school. The rules are different for email marketing than in other formats, and there’s a unique balance between personal and professional outreach that makes it a powerful tool when wielded correctly.

It’s thought that email delivers the highest ROI for marketers, and it can be used as a touchpoint or a complete advertisement campaign. Emails are accessible by many but only come into their own if you understand the concept of segmentation.

This is a method of combining the mass outreach approach with a personal one, where each campaign is sent out to split demographics based on their specific criteria. It allows you to reach people with emails in a more targeted way whilst keeping the benefits of hitting numerous contacts quickly.

Podcasts have a lot of the same benefits as the radio when it comes to reaching your desired demographics, but they have the added benefit of not having to time the ads with your expectation of when your targets will be listening.

Again, use these ads to generate leads and to bring people to your more visual media.

Now you’ve got some ideas about where to put your ads, let’s take a look at some creative ideas for how to build them. 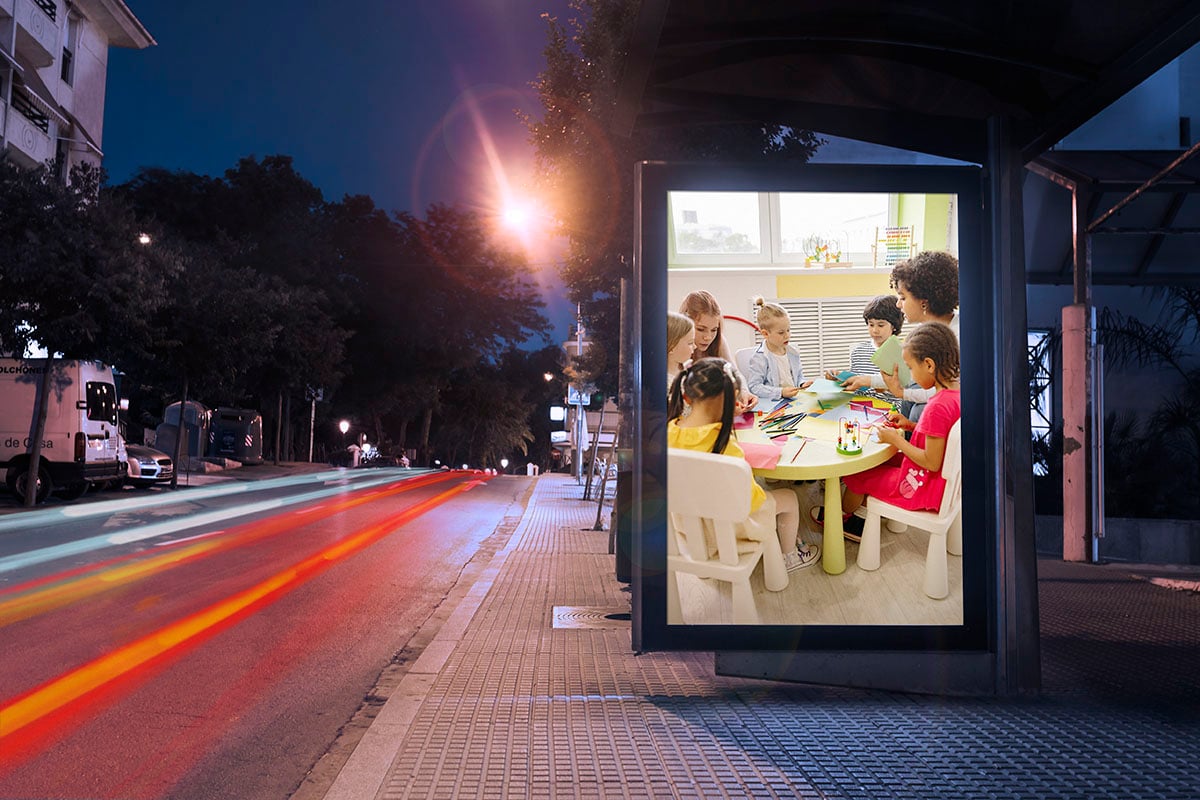 The first step to showing the strengths of your school is in the design of the ad. You’re going to want to design each ad based on the distribution channel it’s intended for, but in order to make the best of your creativity, use a mix of the following creative school advertisement ideas:

Generic slogans are a dime a dozen, and every school seems to have one. Your slogan needs to encapsulate your culture and your goals, not simply point out that you’re a place of education. Avid of using over-used words and phrases such as ‘excellence’ and “Children of tomorrow”; they do nothing to separate your establishment from the establishment.

Instead, consider your goals in terms of the qualities you provide, such as leadership, curiosity, or self-worth. A slogan should be catchy, not too long, outline your key appeal and not be too similar to those of your competitors, so do your research!

2. Focus on the Future

When designing your ads, consider not just the students, but the adults they will become. When you are using visual ads, compare images of students to their professional counterparts, ten or twenty years later, and aim to bridge the gap by telling that story in the ad.

The most important thing is to envision and depict the trajectory that you’re setting your students on, not just the image of what it’s like in the present. This is an investment in a child’s future, so be sure to emphasize that.

Students do best in an environment that suits them, so it’s important that you can express the culture of your institution in your advertisement media. Whether you’re traditional, modern, liberal, diverse, or casual, you’ll find the best-fit students only if you make sure this comes across in your campaigns.

4. Make good use of Visuals

In most formats, you’re going to be using visuals. If it’s a video, this needs to be done with creativity. Following on from the previous points, you need to display your character in a pleasing manner, but without appearing generic, vague, or unprofessional.

The same goes for photos. Don’t rely on your social media-quality images and videos for this; make sure you put the money down for a professional service. The difference is significant, and it will present your school in a bad light if your cinematography or photography isn’t up to scratch.

Mix in graphics and animation as overlays to really emphasize creativity and imagination, and use your school colors where possible.

Your students are your best champions, and nobody is more reliable as a reference than someone experiencing it from the inside. Allow your alumni and your current attendees to voice their opinions, show their character, and vouch for your school.

Don’t simply use the high performers here – try to get as close to a cross-section of your students’ lives as possible, and show the humanity in the experience that they’re having. School ads are not just about the parents’ dreams of excellence, they’re also about facilitating the student’s achievements in a comfortable environment.

Designing and distributing a school advertisement is a relatively simple task that all schools need to embark on at least once a year. However, following the conventional approach can lead you to market in the wrong direction or send media that’s inappropriate for your audiences.

These mistakes will both lose you candidates and ruin your return on ad spend. While the traditional channels are still useful, many of them need to be part of a smart advertising strategy, not the main focus.

Combining ad types that align with the channel used, making use of professional visuals, and targeting your school advert based on the principles of segmentation for improved relevancy. Curacubby can help with the rest. Lead your candidates to Family Signup Tool to streamline enrollment and take the hassle out of student data entry.

New Strategies For Marketing After School Programs In 2022

How To Become A School Administrator And Jumpstart Your Career